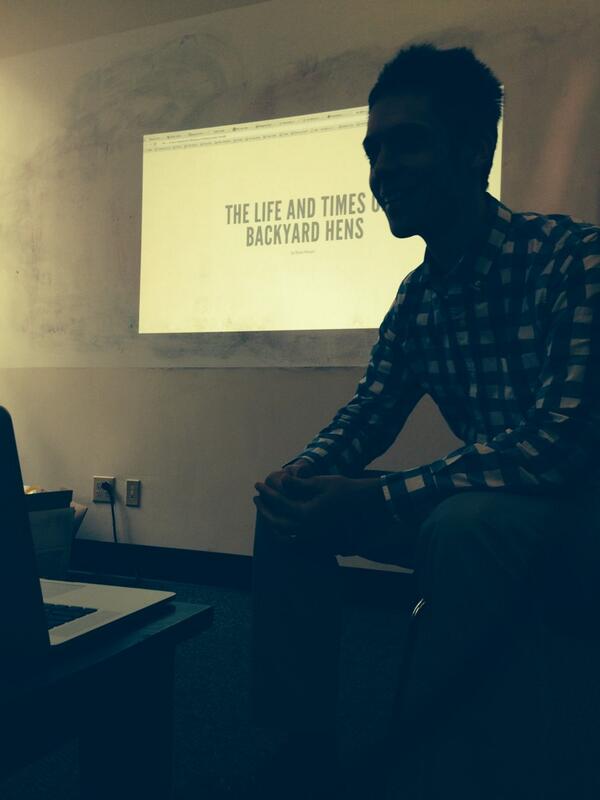 While the lighting in the photo could use some work, you can still observe that I am:

I gave this presentation as part of an ongoing lunch and learn series at thredUP and it went better than I could have hoped. The crowd was very much engaged and I was still fielding follow up questions the next day. A 15 minute presentation in front of ~40 people is barely a blip on the radar for some of my peers, but for me, it is a milestone at least a decade in the making.

Until I was well into my 20’s, I stuttered quite severly. It was difficult, and at times impossible, to speak on the phone, order in a restaurant, even say my own name – let alone engage in public speaking. Stress is a trigger for stuttering so it tends to self perpetuate. Stuttering lends itself to traumatic experiences, which in turn can lead to a lot of fear and shame associated with speaking, which drives still more stuttering.

This cycle started pretty early in my case – when I was five, a nun at St. James Catholic Church in Pittsburgh decided physical violence was the most appropriate remedy for my speech impediment. I spoke only with great difficulty from that point forward. I spent my youth being bullied by peers, ridiculed by teachers, and frequently feeling unwelcome in my own family. Fortunately for my current self, I managed to persist despite often thinking my life was not one worth living.

Things took a turn for the better during my graduate studies at Georgia Tech when I finally took charge of my life. I cut out every negative influence, found a great speech therapist based on my own research, and most important of all, convinced myself the people who had treated me like shit for my entire life, not me, had the problem. Tim Mackesey planted the idea in my head that I could counteract the negative feedback cycle of stuttering with a positive one – I could take any good experience speaking, no matter how small, use it to gain confidence, then use that confidence to drive a series of ever-improving experiences. My first victory was ordering a drink in Starbucks without stuttering – I still remember it as one of the happiest moments I’ve ever experienced, and at age 23, one of the first times I ever felt really good about myself. A cup of coffee gave me the beachhead I needed to retake my life.

While life became easier after that breakthrough, two decades of harm were not simply undone overnight, nor did I expect them to be. In the intervening years I continued to improve my speech and grow as a person by viewing my situation as a perpetual journey, pacing myself accordingly, and limiting my traveling companions to people who believed in me as much as I believed in them. The pattern of discipline and consistent improvement I established when I took on stuttering carried over into every other part of my life, becoming the core of my identity. Now, when I reflect on the person I used to be I find I hardly know him. Yet I take no shame in him. He and I simply mark different points on a path whose destination is unknown, but whose direction I will continue to follow.